Where this is headed by @BloggersRUs

Where this is headed 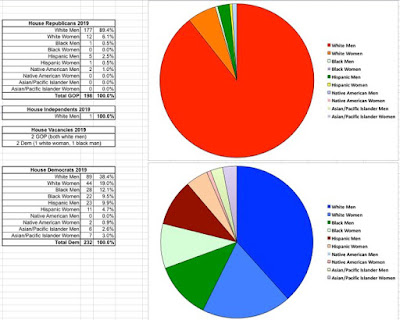 Conservative resentment of whites' flagging demographic dominance became more pronounced over the 2010s. Hugh Hewitt might blame liberal snootiness if he likes (he does), but that's not why over the last decade Republicans needed "surgical" gerrymandering like Viagra for keeping up their membership in Congress.

Hewitt complains Donald Trump's opponents are "millions whose self-regard was greater than their esteem for the people’s vote" even while admitting, yes, yes, we know Trump lost the 2016 popular vote.

But against that resentment, the GOP's own "autopsy" on the 2012 race found former Republican voters described the party as “scary,” “narrow minded,” and “out of touch,” a party of “stuffy old men.” Younger voters rejected them. Minorities thought "Republicans do not like them or want them in the country." Rather than adjust course, Republicans spent the decade resembling those remarks.

Charles Gaba used Twitter Monday to illustrate how much America has changed and how much the Republican Party has not. Membership in the House caucuses tells the tale.


At Salon, David Daley ("Ratf**ked: Why Your Vote Doesn't Count") provides a brief history of REDMAP, the Redistricting Majority Project that flipped state houses red in 2010 and gave Republicans a decade of heavily gerrymandered district maps in Wisconsin, North Carolina, Ohio, Pennsylvania and Michigan. Ensuring minority rule became a goal for pocket-Constitution-carrying Republicans. Once in control, the minority dug in, passing voting restrictions. Florida Republicans undermined a state constitutional amendment restoring voting rights to felons. In Texas, they made it a felony to cast an ineligible ballot by accident, which happens among immigrants and ex-felons unsure of their voting status. Several states passed legislation making it more difficult to mount voter registration drives, etc.

Daley concludes his grim summary of a democracy hijacked:

We stand on the verge of the next redistricting cycle, which will begin in 2021, without the prospect of intervention from the federal courts, with the gerrymander wars headed south and the prospect of states using citizen population, rather than total population, to draw state legislative districts, all, again, with the goal of standing athwart demographic change and shouting “stop.”

Republicans found rigging democracy is easier than persuading voters their policies have merit. While accusing the left of looking down its maternalistic nose at voters and knowing what's best for them, Republicans have chosen to trade democracy for the mere appearance of it. That is what its shrinking base demands.

U.S. population growth has seen a steady decline since 2015, new census data shows, stemming from both "a lack of migrants' entering the country" and "a drop in so-called natural increase, which is the difference between births and deaths." White population decline has the GOP base spooked.

Robert Jones ("The End of White Christian America") explains it is not guns or religion driving support for Trump, but "their belief that 'making America great again' necessarily entails restoring white Christian demographic and political dominance." To that end, the Constitution and the rule of law are disposable.

Explaining away Trump supporters as racist is an oversimplification. This goes much deeper than racism to something much more primal. This political moment is about power and who is unwilling to share it.

We are still running the Happy Hollandaise end-of-year fundraiser. If you would like to support this kind of independent media as we cover what is going to one doozy of a political year, you can do so below.

And thank you so much for reading and supporting my work all these years. I am truly grateful. --- digby