They can save the world by @BloggersRUs

They can save the world 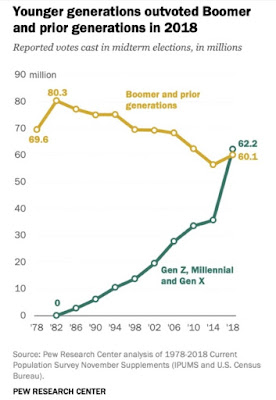 It seems that @SiemensDE have the power to stop, delay or at least interrupt the building of the huge Adani coal mine in Australia. On Monday they will announce their decision. Please help pushing them to make the only right decision. #StopAdani


In a bid to fluff its environmental bona fides, Siemens offered German environmental activist Luisa Neubauer a seat on the supervisory board of newly created Siemens Energy. Suggesting instead they give the seat instead to a member of pro-environment Scientists for Future, Neubauer declined:

"If [Siemens] is honestly committed to fighting climate change and to Fridays for Future, they will respect my decision," she told the German DPA news agency.

Taking the seat herself would legally limit her ability to speak out against Siemens, she said in a statement. Neubauer is 23.

Neither Thunberg nor Neubauer can vote in U.S. elections this fall. But a lot of Americans of their generation who can, plus many of those up to 40-45, do not. At least not in numbers that would challenge the grip on state and federal decision-making held by us oldsters. I regularly mention this (click over for the graphic) not to criticize, but to point out that if Americans under 40 vote this fall, in numbers rivaling voters from 40 to, say, 75, they might just SAVE THE WORLD. Literally.

And end Donald Trump's presidency in the bargain.

How bad can the climate crisis get if Trump wins again? https://t.co/tMRIdqcakM


U.S. emissions are up slightly over January 2017 when Trump began to roll back environmental regulations for the oil and gas industry:

Trump is still working to further weaken bedrock standards. This week he proposed to allow major projects like pipelines and highways to bypass reviews of how they will contribute to global warming. The draft rule is unlikely to become final before the November election, but it is yet another reason industries weighing climate choices might delay significant action.

“What they have done is created confusion within the business community and the environmental world as to what are going to be the standards,” said Christine Todd Whitman, who led the Environmental Protection Agency under the Republican president George W Bush. “Essentially every regulation the agency promulgates gets a lawsuit that goes with it, almost inevitably … that’s the only good thing you can say about it.”

Andrew Light, a climate negotiator in the Obama administration, told reporters Americans choosing Trump again would signal the world they don't care about the environment.

To the victor go despoils

Meanwhile, Trump has populated the upper ranks of the National Park Service with "anti-public land sycophants," Jonathan B Jarvis and Destry Jarvis write at The Guardian. They administration's anti-NPS animus stems in part from the service reporting smaller crowds on the National Mall for Trump's inauguration than Obama's, they speculate. Next, NPS exiled career Washington staff to the field where they could less effectively resist Trump's agenda:

Then came the decisions to leave the parks open to impacts during the unfortunate government shutdown, illegally misuse entrance fees, open park trails to e-bikes, suppress climate science, kill wolf pups and bear cubs in their dens to enhance “sport hunting”, privatize campgrounds, and issue muzzle memos to park managers. With a waiver of environmental laws, bulldozers are plowing ancient cacti in national parks along the southern border in order to build a wall. Senior career park managers are likely to be replaced with unqualified political hacks.

These are not random actions. This is a systematic dismantling of a beloved institution, like pulling blocks from a Jenga tower, until it collapses. You ask, why on earth would someone want to do that to the popular National Park Service, the subject of one of Ken Burns’ acclaimed documentaries and often called “America’s best idea”?

Because if you want to drill, mine and exploit the public estate for the benefit of the industry, the last thing you want is a popular and respected agency’s voice raising alarms on behalf of conservation and historic preservation.

The great dismantling of America's national parks is under way | Jonathan B Jarvis and Destry Jarvis https://t.co/GNC4AGkIrS


The political class listens to two things more than people's voices: money and votes. Voters under 30-35 may not have the political-donation clout of their elders, but they have the numbers in raw population to seize not just the attention of their leaders, but control of the levers of power. Rep. Alexandria Ocasio-Cortez may be a media phenomenon, but she was not a one-off. She turned out the heir-apparent to Nancy Pelosi by turning out underrepresented voters, Latinos and younger white voters.

Pew Research reported last May that voters from 18 to 53 cast slightly more votes than Baby Boomers in 2018. But voters over 40 are already joining their elders among regular voters. Including voters up to 53 obscures significantly less participation among younger voters. Voting among Americans 18-29 may have jumped 79 percent over 2014, but the question is 79 percent over what? See my graph.

Younger voters can save the world this fall. Literally. Like superheroes.

Their futures and the world itself is in peril. It's dying to get better.

For The Win, 3rd Edition is ready for download. Request a copy of my free countywide election mechanics guide at ForTheWin.us. This is what winning looks like.