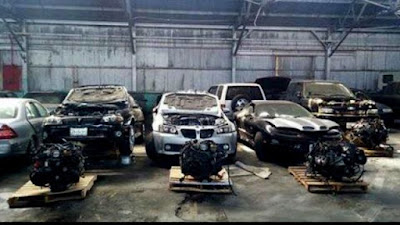 Percolating around the edges of the deconstruction of a once great power is talk of privatizing Veterans Administration hospitals. Abruptly fired last week by the president who hired him (the White House now claims he resigned), former Department of Veterans Affairs secretary David J. Shulkin takes a dim view of privatization. In his New York Times op-ed, he catalogues improvements he believes occurred on his watch: reduced wait times, more and better mental health services, and a streamlined claims and appeals process. Nonetheless, he writes, the vultures are circling:

It seems that these successes within the department have intensified the ambitions of people who want to put V.A. health care in the hands of the private sector. I believe differences in philosophy deserve robust debate, and solutions should be determined based on the merits of the arguments. The advocates within the administration for privatizing V.A. health services, however, reject this approach. They saw me as an obstacle to privatization who had to be removed. That is because I am convinced that privatization is a political issue aimed at rewarding select people and companies with profits, even if it undermines care for veterans.

I am not a veteran. But by most accounts, the VA hospital located here provides some of the best care in the system. Talk of privatizing VA health care prompted someone on a local Facebook thread to solicit opinions on privatization. I have one.

Privatization of any public service is not about quality. It's about ideology and about into whose pockets tax dollars flow. It arises from the privatizer's belief that any product or service provided by "we the people" that might even in theory be provided by the private sector is a crime against capitalism. They don't see a need to be filled or a service to be improved or a duty to be met. They see billions of dollar$ budgeted annually of which they are not getting their cut.

They want to privatize public education — a middle-man in every middle school — because the single largest component of every state's annual budget is education and They. Want. Their. Cut. So they have demonized teachers and public pensions and public servants who stand between them and their payday. They have cut budgets to degrade services and hasten institutional decline to pave the way for eliminating the public from public service and services.

Thousands of Oklahoma school teachers this week went on strike after getting a significant pay raise. American Federation of Teachers president Randi Weingarten told NPR teacherscare striking because overall spending has not increased. The pay raises come by shifting dollars at the expense of colleagues and core spending when some districts already use textbooks 50 years old. Teachers see school spending as a public investment. Privatizers just see a cost.

Those promoting privatizaton want to sell off publicly owned infrastructure for a song, public trusts you, your parents and grandparents and I paid through our lifetimes to build and maintain. Privatizers do not want to fix public infrastructure. They want to extract profits from it. They are rentiers looking to suck even harder off the public teat with far less accountability.

The VA is yet another program they hope to turn into a profit-producing venture by cutting costs and shortchanging patients under the rubric of "efficiency." And when they have sucked all the profit they can from it, they will abandon it for the next investment opportunity and discard its empty husk, like a retailer with an underperforming big-box store.

And public education? They want to privatize it as well, slowly weakening its funding by diverting resources to vouchers and charters because, you know, choice and competition. The real goal is to increase the pressure to fully privatize public education mandated by state constitutions from the Atlantic to the Pacific since their adoption, thus to open "the Big Enchilada" to private investors. They too will cut costs and services to shave off more public tax dollars for themselves, meaning less for children's education.

The vultures are slowly privatizing prisons as well, and perversely incentivizing lawmakers, judges and law enforcement to keep prison beds filled and investors' portfolios padded. I'm wondering when individual Americans get vouchers from the Pentagon to purchase their own national defense. Because, you know, choice and competition.

But what happens to public schools and children's education, for example, when the system is fully privatized and hollowed out, and investors decide the hot new investment opportunity lies somewhere else? They just walk away. Investors have no commitment to the public good, no faith to keep with public trust, only to their bottom lines, especially for services like the VA's that are not and were never intended to be for-profit. Want to improve the VA? Improve the VA. Privatizing it is its death sentence.

Privatizers are the Midas cult. They believe anything that can be turned into gold should be, including wounded veterans and children. They are the corporate raider from Pretty Woman, who believes more in making money than in building things. They don't believe in this country. They believe in stripping it. Their lobbyists have turned our legislatures into chop shops so they can sell off America for parts. They have no shame, because shame is not as profitable as having none.

For The Win 2018 is ready for download. Request a copy of my county-level election mechanics primer at tom.bluecentury at gmail. (If you are already on my email list, check your in-box.)