Those overlooked places by @BloggersRUs 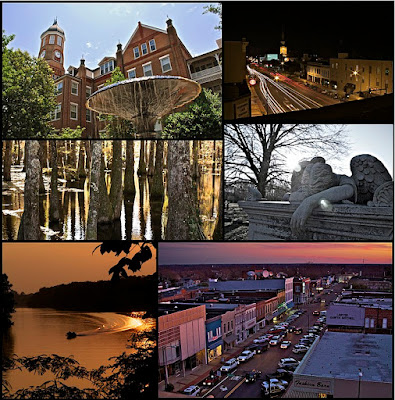 The United States does indeed have a future, James Fallows writes in The Atlantic. The hopeful signs he's seen in his travels to non-marquee places do not make the national news, however:

Serious as the era’s problems are, more people, in more places, told us they felt hopeful about their ability to move circumstances the right way than you would ever guess from national news coverage of most political discourse. Pollsters have reported this disparity for a long time. For instance, a national poll that The Atlantic commissioned with the Aspen Institute at the start of the 2016 primaries found that only 36 percent of Americans thought the country as a whole was headed in the right direction. But in the same poll, two-thirds of Americans said they were satisfied with their own financial situation, and 85 percent said they were very or somewhat satisfied with their general position in life and their ability to pursue the American dream. Other polls in the past half-dozen years have found that most Americans believe the country to be on the wrong course—but that their own communities are improving.

What Fallows and his wife Deb found is that following economic displacements, cities often experience a revitalizing resurgence of civic engagement. Following the municipal corruption scandals in Bell, CA — and after arrests, trials and convictions — Pete Peterson, the dean of Pepperdine University’s School of Public Policy, told Fallows, “That city has seen nothing less than a civic renaissance, with new leadership and a public much more involved in the future of the city ... It’s an amazing before-and-after illustration of what happens when people get engaged.”

Immigration "rarely made the top five" in polls for the five years leading up to the election of Donald Trump. Even afterwards, Fallows writes, "nearly two-thirds of Americans felt the level of immigration should either stay the same or go up." The greatest fears appear in areas with the fewest immigrants, as they did in England prior to the Brexit vote.

Whereas immigrants congregate in big cities such as Chicago and Los Angeles, many refugees are sent to medium-size communities that have specialized in assimilating them, a process we saw in, for instance, South Dakota, Vermont, Minnesota, and Pennsylvania, among other states. Midwestern industrial cities that have lost some of their home-born population have pushed hard for outsiders to revitalize them. Erie was a magnet for eastern-European and other immigrants during its manufacturing heyday, from the mid-19th through the mid-20th centuries. Now refugees, including recent arrivals from Syria, make up fully 10 percent of its population, and they supply much of its entrepreneurial energy. In 2006 a group called Welcoming Tennessee began celebrating the importance of immigrants and refugees to Nashville’s economy. It has spread to become Welcoming America, supporting immigrant and refugee settlement in more than 50 cities.

Fallows finds hopeful signs in places that get little attention unless there is a mass shooting or natural disaster. Perhaps as news consumers our views of "how bad things are" are as skewed by the information to which we are exposed as xenopohobes' views are by lack of exposure to actual immigrants.

Suppose you are skeptical of this fundamental claim, about the ongoing health of local American society. I suggest the following test, and mean it seriously rather than just as a thought experiment: Through the next year, go to half a dozen places that are new to you, and that are not usually covered in the mainstream press. When you get there, don’t ask people about national politics. Trump, Hillary Clinton, the Russians, the Mueller investigation—if it’s on cable news, don’t ask about it. Instead ask about what is happening right now in these places. The schools, the businesses, the downtown, the kind of people moving out and the kind moving in, and how all of this compares with the situation 10 years ago. This process, repeated again and again, led us to the perspective I am presenting here.

When Danica Roem won her seat in the Virginia House of Delegates last November, she ran on easing traffic congestion in the district, not on her identity as a transgender candidate. All politics is not national.

Fallows' view is upbeat, but his report on positive economic developments outside Washington, D.C. elides some darker political developments. Voters and Wisconsin and North Carolina have seen the consequences of allowing the extremist right to win control of the state legislature. So while the press focuses on the impact of this fall's horse races in the U.S. House and Senate, winning control of state capitols and county-level government is no less important. With the 2020 census arriving soon, winning back control of state legislatures and the next redistricting is more important both for national representation, for the competitiveness of federal elections that follow, and for ending the kind of reign of insanity that made Republicans' tax-cutting experiment in Kansas, for example, "a cautionary tale." For Democrats in the minority in Raleigh, NC, it's trench warfare.

Speaking of trenches, NC Reps. Mark Meadows and Patrick McHenry are entrenched in districts virtually unassailable as drawn. Extracting them will require control of redistricting first, a situation that will require local solutions in a lot of different states as well.