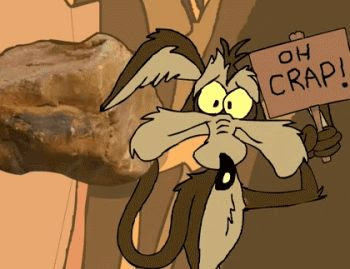 Sean Hannity last night borrowed a bulletin board from Glenn Beck to outline the "criminal" roots of the Mueller investigation.

Throughout the lengthy, rambling monologue, Hannity accused Mueller, currently Trump’s main foe, of prosecutorial impropriety—from “looking the other way,” as a federal prosecutor in Boston, at serial killer and gangster James “Whitey” Bulger’s crimes to prosecuting the wrong man for a post-9/11 anthrax attack. Along the way, he made mention of Democratic donors, connections to the Clinton family, and FBI agents who texted anti-Trump messages after the election. Ultimately, Hannity concluded, there are three connected “Deep State crime families” actively “trying to take down the president.”

Trump Illustrated (Fox News) couldn't possibly have been trying to get ahead of the story teased in this ABC promo released earlier in the day, now could it?

ABC plans to air an interview with former FBI director James Comey Sunday night. The promo spot above teases pretty hard what we might hear, including that Comey believes our sitting president operates like a mob boss (although George Stephanopoulos may be putting those words into Comey's mouth). Axios claims a source present at the taping:

According to the source:

"There" being the question of whether Trump should be impeached, presumably. Comey's book, "A Higher Loyalty," arrives in stores on Tuesday.

Trump tweeted in advance about Hannity's "big" show to make sure his believers would not miss it.

Sadly, that’s an apt comparison. Trump’s ethos, ever since he was first sued by the Justice Department for racial discrimination in 1973, has been about cutting corners. He got away with it when he was a businessman buying $100,000 worth of pianos and stiffing the seller.

Now his pattern of behavior may finally be catching up with him; he and those around him may rue the day he was elected president. Trump himself is probably protected from indictment under Justice Department guidelines, and people like Paul Manafort may be counting on a pardon, but the political price of pardons will be increasingly costly — and they won’t provide protection from state prosecutions.

Trump says he’s the victim of a “witch hunt,” but it’s actually a “criminal hunt” — one presided over by Republicans, most of whom he has appointed. He claims persecution, but it’s just embarrassing for a billionaire who is the most powerful person in the world to exhibit a victim complex.

But it is a victim complex his base shares, which is why followers identify with him so (in Trumpish) strongly. The world is a "so unfair" place, occupied territory held by the Devil and his minions, and just waiting to be reclaimed from the Others by oppressed members of God's dominant majority faith.

Appearing on "Fox and Friends" this week, David Brody and Jenna Browder of the Christian Broadcasting Network’s "Faith Nation" claimed evangelical support for Trump remains strong because his Oval Office remains "for the most part" scandal-free. "We’re not hearing about scandals coming out of the Oval Office," she said. (Translation from Old Cultish: No reports of BJs in the anteroom.)

Christian Host: Evangelicals Back Trump Because His Oval Office is Scandal-Free https://t.co/59ZmSCs30c pic.twitter.com/OSV6T9vWcL

If you’re willing to ignore his open racism, outright hypocrisy, and policy positions designed to make life worse [for] the people who can least afford it, I guess it’s easy to think he’s the man evangelicals have been waiting for.

Browder tells Fox with a broad smile, "Evangelicals, they will tell you that they believe Donald Trump is God's chosen candidate. And for so many people that just doesn't make sense."

For those of you who reside in Newtonian space, we will as they say on TV, leave it right there.