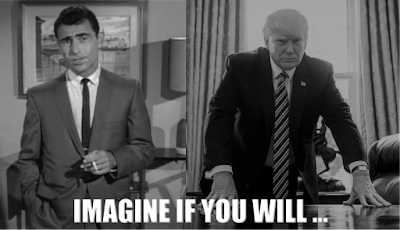 Charles Blow declared in February "we are already trapped in a slow-motion constitutional crisis, or constitutional train wreck." Days later, Keith Whittington, a professor of politics at Princeton University, and Eric Posner, of the University of Chicago law school, told The Guardian, no, we were not there yet. That would require the "unanswered flouting of constitutional rules."

Yet with every day special counsel Robert Mueller's investigation into Russian election interference continues, with every degree the water in the pot rises, the frog slowly realizes it is being cooked. Whether the frog is the sitting president or all of us remains to be seen.

The FBI in early April raided the office, hotel room, and home of Donald Trump's personal lawyer, Michael Cohen, in connection with the Stormy Daniels lawsuit. Trump called it "an attack on our country." Days later, Watergate affair journalist Carl Bernstein declared, "We are in a constitutional crisis." During a CNN interview, Bernstein said, "The president of the United States has made clear to those around him and to those who are closest to him in the White House and among his friends that he is determined to shut down this investigation."

After the New York Times published on Monday a long list of questions Mueller wants Trump to answer, there was confusion over its origins. The Times reported it obtained the list obtained from "a person outside Mr. Trump’s legal team." Many of the questions pertain to obstruction of justice. Trump called the leak "disgraceful," further evidence Mueller has gone off the rails. But the Washington Post now suspects the leak may have come from Trump's own attorneys.

In a tense, early March meeting with Mueller, Trump's attorneys insisted Trump had no obligation to answer questions, the Post reports:

But Mueller responded that he had another option if Trump declined: He could issue a subpoena for the president to appear before a grand jury, according to four people familiar with the encounter.

Mueller’s warning — the first time he is known to have mentioned a possible subpoena to Trump’s legal team — spurred a sharp retort from John Dowd, then the president’s lead lawyer.

“This isn’t some game,” Dowd said, according to two people with knowledge of his comments. “You are screwing with the work of the president of the United States.”

Mueller subsequently provided a series of topics he wished to discuss. Citing anonymous sources, the Post reports Trump lawyer Jay Sekulow drafted those topics into the list of questions leaked to the Times.

Whether the leak was intended to help dissuade Trump from cooperating or to discredit the Mueller investigation (as Trump suggested) is unclear. But as Bernstein suggested, Trump is determined to shut down the investigation.

Trump allies in the House Freedom Caucus threaten to impeach Deputy Attorney General Rod Rosenstein to help that along. The Washington Post reported Monday it possessed leaked articles of impeachment drafted to target him. Rosenstein oversees the Mueller investigation had signed off on the Cohen raid — in a separate investigation — and stands between Trump and firing Mueller:

The document, which was obtained by The Washington Post, underscores the growing chasm between congressional Republican leaders, who have maintained for months that special counsel Robert S. Mueller III should be allowed to proceed, and rank-and-file GOP lawmakers who have repeatedly battled the Justice Department during the past year.

The draft articles, which one of its authors called a “last resort,” would be unlikely to garner significant support in Congress. But the document could serve as a provocative political weapon for conservatives in their standoff with Mueller and the Justice Department.

Rosenstein brushed away the threat:

“There are people who have been making threats, privately and publicly, against me for quite some time,” Rosenstein said at a Law Day event Tuesday at the Newseum in Washington. “I think they should understand by now the Department of Justice is not going to be extorted. We’re going to do what’s required by the rule of law.”

Someone needs to remind Trump and his associates in and out of Congress the law actually applies to them.

Case in point. NBC reported on Tuesday that in early February last year, Trump's personal bodyguard, a layer for the Trump Organization and a third man entered the office of Trump's personal physician and took/confiscated/stole his medical records on the new president. What Dr. Harold Bornstein described the incident as a "raid" took place two days after Bornstein told a reporter he had prescribed hair growth medicine for Trump for years:

In an exclusive interview in his Park Avenue office, Bornstein told NBC News that he felt "raped, frightened and sad" when Keith Schiller and another "large man" came to his office to collect the president's records on the morning of Feb. 3, 2017. At the time, Schiller, who had long worked as Trump's bodyguard, was serving as director of Oval Office operations at the White House.

"They must have been here for 25 or 30 minutes. It created a lot of chaos," said Bornstein, who described the incident as frightening.

Plus, a violation of the patient privacy law, HIPPA, Bornstein added, as was his discussing his patient's medications with the press. Bornstein also admitted he had not written the letter he issued declaring Trump's health "astonishingly excellent." Bornstein tells NBC, "He [Trump] wrote it himself."

"We have a president who is the kind of man who has goons," McIntosh told Hayes.

"There's nothing funny about him applying these absolutely Mafia-like tactics to our country," McIntosh said, adding he has a pattern of such behavior that echoes Stormy Daniels's allegation she was threatened by someone on Trump's behalf.

"We are dealing with a very thin-skinned narcissist on a hair trigger ... who has goons." Some of them, it seems, wear lapel pins that allow them to work on Capitol Hill.

Are we in a constitutional crisis yet? Do they have those in the Twilight Zone?