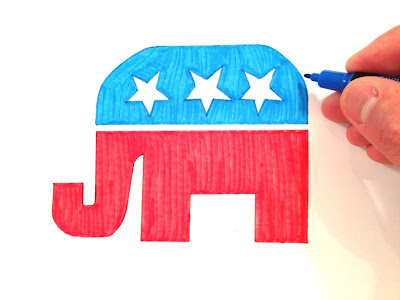 The sitting president leads the press around by the nose. He has since announcing his run for the presidency. Only recently have reporters begun to snap out of their conditioning and begun to openly challenge the president, fact-checking him live (and his team) and publicly pushing back on the lies.

Key to spotting how Trump's shtick works is understanding that language is not neutral. As Mawuna Remarque Koutonin observed recently in The Guardian, the word "expat," a person "temporarily or permanently residing in a country other than that of the person’s upbringing," is employed almost exclusively to describe white people. Even the Wall Street Journal admits who is an expat "depends on social class, country of origin and economic status." Koutonin continues:

Hardly any other example better explains how privilege is woven into the culture. There are no expats being processed on the Texas border.

Through sheer force of repetition -- the president repeats phrases mid-sentence the way others use "um" -- the press has begun adopting Donald Trump's language and framing. Especially words that convey toughness or strength. At the Plum Line blog, Greg Sargent takes colleagues to task for coverage of the just-released Department of Justice’s inspector general report on the Hillary Clinton email investigation. Reporters have unconsciously adopted language that supports the Trumpian narrative that the report proves anti-Trump bias in the FBI:

For instance, the New York Times quotes a Trump ally pushing his narrative, and then asserts as fact that “any independent criticism” of Comey “helps” Trump “undermine the credibility of someone who may be a crucial witness against him in any case of obstruction of justice.” The Associated Press claims the report gave Republicans “ample fodder” to “question” the Russia probe. The Post says the report will serve as a GOP “cudgel” against Mueller. CNN asserts that the inspector general gave Trump “fodder” to claim a “deep state” coup.

But here’s the problem: There is no neutral way to make this claim. Either the inspector general’s actual findings legitimately support that Trumpian argument about the significance of those findings, or they do not. To be sure, these accounts sometimes quote an interested party on the other side saying the findings don’t support the Trump/GOP interpretation. Yet this isn’t enough, particularly since these accounts also state as neutral fact, in the voice of the omniscient journalist, that the findings do indeed provide “fodder” for those arguments, effectively conferring legitimacy on the Trump/GOP interpretation of them.

Sargent gives a series of examples of ho bad-faith ref-working by the president and his allies produce results that advance a false picture of reality.

The problem is what to do about it. Cognitive scientist George Lakoff explains to Brian Stelter in the "Reliable Sources" podcast how to stop enabling the sitting president's lies (emphasis mine): "Start with the truth that he's trying to hide. You make that clear, and then you point out that the president is trying to hide this by lying ... say a little bit about what the lie is. And go back to the TRUTH."

So, a "truth sandwich," Stelter quips.

But the press is trained to repeat what public figures say. They are doing what they were taught to do in journalism school. But language is not neutral, Lakoff insists. He writes in the Guardian:

One thing Trump does well is marketing. More conservatives study this than liberals. "He's been selling for fifty years." By now how he deploys language is reflexive. (It's obviously not deeply thought out.)

Trump’s tweets are not random, they are strategic. There are four types: 1) Pre-emptive framing, to get a framing advantage. 2) Diversion, to divert attention when news could embarrass him. 3) Deflection: Shift the blame to others. And 4) trial balloon – test how much you can get away with. Reporting, and therefore repeating, Trump’s tweets just gives him more power. There is an alternative. Report the true frames that he is trying to pre-empt. Report the truth that he is trying to divert attention from. Put the blame where it belongs. Bust the trial balloon. Report what the strategies are trying to hide.

Cornered by the Russia investigation, Trump is working overtime to twist the facts, the law, and reality in general, to benefit himself. As the indictments and the evidence pile up in favor of a case for Trump-Russia collusion in the 2016 election, he’s made it clear that he considers himself above both the law and the truth. As president of the United States, anything he says – true or false – is faithfully parroted by the press. This needs to change.

Democracy is under attack. Journalists need to realize, Lakoff says, simply quoting him at face value is destructive.

But Lakoff has been putting out this message for some time, Stelter notes. Does he think journalists learned anything?

"We want to be able to say, just tell people the facts and they will reason to the right conclusion. That's what Descartes said in 1650, and he was wrong."