All the president's Goodfellas by @BloggersRUs

All the president's Goodfellas 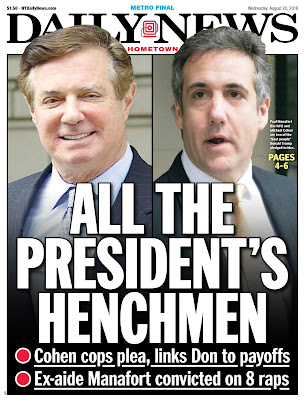 Rachel Maddow observed the first two sitting members of Congress to endorse Donald Trump have been indicted on corruption charges. (Republican Chris Collins of New York was arrested for insider trading on August 8.) Who's No. 3, she asked?

Manafort is not done. The jury deadlocked on ten charges and the judge declared a mistrial. Prosecutors could elect to re-try those ten, plus Manafort faces trial in Washington, DC on seven other counts. That trial begins September 17.

But most damaging to the sitting president were Cohen's statements in court about illegal campaign contributions (hush money payments) he made ahead of the presidential election to buy the silence of adult film star Stormy Daniels and former Playboy model Karen McDougal. The New York Times reports:

[Cohen] told a judge in United States District Court in Manhattan that the payments to the women were made “in coordination with and at the direction of a candidate for federal office,” implicating the president in a federal crime.

“I participated in this conduct, which on my part took place in Manhattan, for the principal purpose of influencing the election” for president in 2016, Mr. Cohen said.

If prosecutors have evidence such as text messages or recordings corroborating Cohen’s statement implicating Trump, that would be more than enough for Trump to be charged with a crime. It is illegal to conspire with someone to make an excessive illegal contribution, and it is illegal for a candidate or campaign to accept an excessive illegal contribution. The same goes for the illegal corporate contributions. As Cohen’s attorney Lanny Davis asked: “If those payments were a crime for Michael Cohen, why wouldn’t they be a crime for Donald Trump?”

Of course, Department of Justice guidance says that prosecutors cannot indict a sitting president. This has never been tested by the courts, though. At the same time, President Trump is about to be given a hand-picked Supreme Court justice in Judge Brett Kavanaugh, who has indicated a desire to expand presidential power and a profound skepticism of investigations of the president.

A couple of tweets put a finer point on Hasen's comments:

...and, while you're at it...How in the hell does what is, essentially, an unindicted co-conspirator get to continue with a SCOTUS nominee?

Throughout his term, Trump has bristled at the idea that his win with a minority of the popular vote was illegitimate. He claimed an unprecedented electoral college win he didn't have and an unprecedented inauguration crowd photos clearly show wasn't there. He alleged he would have won an outright if millions of imaginary illegal voters had not voted for Hillary Clinton. "No Collusion" will hang around Trump's neck like an albatross. Trump had help from the Russians whether or not Robert Mueller can prove his campaign conspired with them. (TBD)

If approved in the Senate, the unindicted co-conspirator's nominee to the Supreme Court could be with us until 2050. Kavanaugh's vote could tip a court ruling in Trump's favor should the question of indicting a sitting president come before it. Such a ruling would call the legitimacy of the sitting president even further into question, but also Supreme Court rulings for decades. There is no indication at this point Kavanaugh would recuse, just as there is no hint he will withdraw his name. Someone yesterday tweeted that may speak more about Kavanaugh than stacks of public records.

"Today clarifies that November is a referendum on impeachment -- an up or down vote.

"Every Trump supporter needs to get with the program."

Hasen in a tweet throws cold water on any possibility the GOP will postpone Kavanaugh hearing: "McConnell would push Kavanaugh through even if the president were under indictment and impeached. This is #1 priority for him and R base."