Send thoughts and prayers by @BloggersRUs 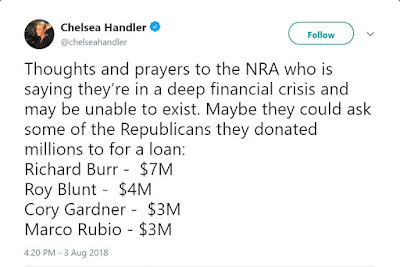 Some things a gun won't help. Actually, many things. Including legal pressure from the state of New York.

The National Rifle Association warns in a court filing obtained by Rolling Stone that it may “be unable to exist… or pursue its advocacy mission” owing to pressure from Gov. Andrew Cuomo. The organization is being "blacklisted," the NRA complains:

Specifically, the NRA warns that it has lost insurance coverage — endangering day-to-day operations. “Insurance coverage is necessary for the NRA to continue its existence,” the complaint reads. Without general liability coverage, it adds, the “NRA cannot maintain its physical premises, convene off-site meetings and events, operate educational programs … or hold rallies, conventions and assemblies.”

The lawsuit stems from actions taken by New York financial regulators to halt the sale of an illegal, NRA-branded insurance policy. The NRA actively marketed “Carry Guard,” a policy to reimburse members for legal costs incurred after firing a legal gun. In May, the state of New York found that Carry Guard “unlawfully provided liability insurance to gun owners for certain acts of intentional wrongdoing.” The NRA’s insurance partners agreed to stop selling the policies and pay a $7 million fine.

The NRA complaint alleges that New York was not content to block this single insurance product, but instead campaigned to sever the NRA’s ties to a wide range of financial service providers, from insurance companies to banks.

Cuomo scoffed at the lawsuit on Friday, saying the state would file a motion to dismiss. "New York will not be intimidated by the NRA's frivolous lawsuit to advance its dangerous gun-peddling agenda," he said.

Allow me to be the first to offer my thoughts and prayers.https://t.co/rwYjNhdlSe

I would to offer the NRA my thoughts and prayers. https://t.co/p0FchInwqK

Join me in sending thoughts and prayers to the @NRA. https://t.co/molJ9HOfV2

Cuomo offered his thoughts and prayers in blunt terms:

Maybe a jar with Wayne LaPierre's picture beside the cash register at the convenience store?