If it is broke, fix it by @BloggersRUs

If it is broke, fix it 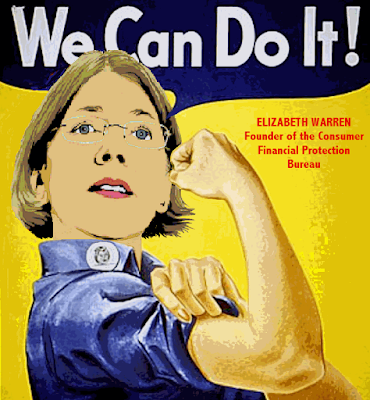 "One of the scammiest parts of Trump’s politics is that he talks like a labor leader but governs like a corporate lobbyist," quips E.J. Dionne in the Washington Post. Remember the great health care replacement for Obamacare he was going to deliver right out of the gate? Better, cheaper? Remember all the winning? And jobs. There would be jobs.

There are jobs, at least. Robert J. Samuelson (also with the Post) writes that the jobless rate has sunk to its lowest mark since 2000. Yet wages remain stagnant. They've been stagnant for decades. Wages have risen 2 percent since January 2015. "The gain is roughly one-half of 1 percent annually," Samuelson explains. "Little wonder that many workers feel they’re not getting ahead. They aren’t." In fact, workers' standard of living is going down.

The economy people work for isn't working for them. Much of Republicans’ $1.5 trillion in tax cuts went into stock buybacks, not into investment or wages. Several factors may be behind wages flatlining. Demographics, robots, etc. But health care costs are a major contributor. Health insurance premiums are rising faster than wages.

A recent survey from Down Home NC in two counties hit hardest by economic shifts found losing access to health care and having income sufficient to meet other basic needs topped respondents' concerns.

Many of Down Home's respondents, particularly among people of color, blamed Donald Trump and the government for their problems. But they had broad complaints about the economy:

In comments from people during the survey, we heard many complaints that government is not concerned with their struggles, is unfair, inefficient, or serves only the rich and powerful. Women are more likely than men to blame the “rich and powerful.”

None of this is new. Professor Elizabeth Warren was lecturing on how rising coats and flat wages contributed to the middle class collapse over a decade ago. Add to that higher costs resulting from Trump launching trade wars. The New York Times Editorial Board wrote in August:

All of this seems like a pretty poor return on investment for Mr. Trump’s $1.5 trillion tax cuts, at least for most working-class Americans, who benefited least from the tax cuts. None of these issues by themselves will put the brakes on an economy that is powering along with a 3.9 percent unemployment rate. But the friction is building.

Warren, now a senator from Massachusetts, comes to repair capitalism, not to bury it. In a conversation with The Atlantic's Franklin Foer, Warren outlines the goals of her Accountable Capitalism Act and Anti-Corruption and Public Integrity Act. More detailed than simply getting money out of politics, her prescription for what's ailing us is to address the conduct of both business and government. Capitalism and democracy are intertwined.

Markets work well if properly regulated, Warren argues. "GDP goes up 1935 to 1980 and the 90 percent of America—everybody outside the top 10 percent—gets 70 percent of all new income growth." It was a period of rapid growth with strong enforcement of rules. Then in the 1980s we pulled cops off Wall Street and "the wheels came off." Now 84 percent of the wealth in the stock markets goes to a mere 10 percent of Americans, she tells Foer:

Foer: There are all these hints of Louis Brandeis in what you do. Brandeis had a vision of how the economy could be structured differently when the rules that he wanted were applied. He favored the small shopkeeper. In your vision, who gets favored? Are there forces in the market that you feel like are being unfairly shackled that you want to see unleashed?

Warren: Yes. Perfect. Competition. I love competition. I want to see every start-up business, everybody who’s got a good idea, have a chance to get in the market and try. This is what's so interesting to me. There are so many people right now who argue against these reforms and other reforms, who claim they are pro-business. They’re not. They’re pro-monopoly. They’re pro–concentration of power, which crushes competition.

This is where the political and the economic interact. Once a corporation climbs up the ladder so that it’s got hundreds of millions—no, so that it’s got billions of dollars in resources—today too many of them turn around and use those resources to influence government to cut off that ladder, so nobody else climbs it. To cut off that ladder so that the big guys don’t have to compete with the little guys anymore.

But a "crisis in capitalism" is an abstraction, Warren recognizes. She needs (and wants) to make it more personal if the scholar of contract law, bankruptcy, and commercial law hopes to successfully market her Accountable Capitalism and Anti-Corruption and Public Integrity Acts.

Warren: We need to make capitalism work for your family and we need to make democracy work for your family ... It’s not that you’re wrong, I’m just saying this is where I land it, right with how families experience this economy. A rising stock market is not helpful to the half of all America who own not one single share of stock. Rising productivity that doesn’t translate into rising wages for the people who actually do the work is not building a better future for them. Costs that are skyrocketing for education and health care and housing put a squeeze on families that are struggling with flat wages, so every one of those is about the lived experience, and that’s what colors our view of both capitalism and democracy in 2018.

Warren's one-two punch to the jaws of the powerful will go nowhere without some rising up from "down home." But the Oklahoma native has a knack for that too. People don't care about saving democracy as much as feeding themselves and their kids. They need to know what's in it for them.