They are nervous. Nervous is good. by @BloggersRUs

They are nervous. Nervous is good. 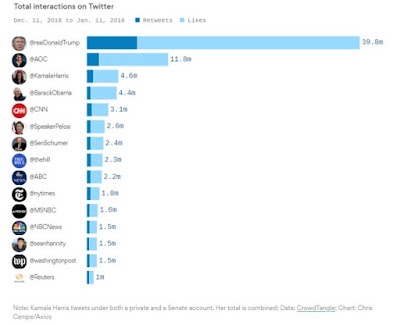 Rep. Alexandria Ocasio-Cortez (AOC) has fellow Democrats on Capitol Hill nervous. A Politico story on the freshman Democrat from New York quotes a senior Democratic aide saying, “People are afraid of her.” Good.

More established players are put off by her star power and want to "rein her in," as Politico put it. They object to the grassroots effort to award the freshman a seat on the powerful Ways and Means Committee. They lag behind voters in supporting ideas as big as her Green New Deal. They especially bristle at her criticizing fellow Democrats and want her to display more esprit de corps. As Republicans are of Donald Trump's, fellow Democrats are intimidated by her Twitter account.

Less pop-culture-versed colleagues probably had to ask aides what she meant when Friday morning AOC responded to the Politico story by quoting Alan Moore, British author of the “Watchmen” graphic novels.

Rep. Gregory Meeks (D-N.Y.) tells Politico "he’s taking Ocasio-Cortez at her word that 'she wants to work with everybody,' as he said she told him." The New York delegation intends to nominate her for a seat on Financial Services Committee:

“It’s one thing” for outside activists to go after Democratic incumbents, Meeks said. “It’s another thing when you’re in this institution and you’ve got to work to get things done.”

But Rep. Raúl Grijalva (D-Ariz.), the former head of the House Progressive Caucus, said Democrats should probably get used to Ocasio-Cortez.

AOC is attempting to pull off that most delicate of moves for a grassroots activist: perfecting the inside-outside game. The insurgent needs to use the authority of her new office to navigate and reform the temple without being seen immediately throwing over the tables of the money changers. All in good time.

Some conflict between Ocasio-Cortez, a democratic socialist, and senior Democrats, who are generally to her right, was inevitable. But the criticisms included in the Politico piece were not framed in ideological terms. “She needs to decide: Does she want to be an effective legislator or just continue being a Twitter star?” said one unnamed Democrat described as being “in lockstep with Ocasio-Cortez’s ideology.” They added, “There’s a difference between being an activist and a lawmaker in Congress.” Others worried that Ocasio-Cortez’s fame could cost the party seats. Nydia Velazquez, a Democrat from New York, said that she’d counseled the congresswoman against backing primary challenges to fellow Democrats in the future. Ocasio-Cortez’s own record – she ran as a primary challenger and supported similar bids from other left-wing insurgent – appears to concern them, as does her affiliation with Justice Democrats, which endorsed her and other insurgents in 2018.

It’s not clear from these criticisms that senior Democrats understand the reasons for Ocasio-Cortez’s run, or her victory over incumbent Joe Crowley. One party aide told Politico that people “are afraid of her” and her viral tweets, a sentiment that reduces the congresswoman to emotion and affect. But her stardom has discernible origins that counter such a simplistic depiction of her rise to power. Ocasio-Cortez’s popularity is tied to her ideology, which incorporates both her policies and her hostility to establishment politics. She is an insurgent, and that’s exactly why people like her.

In that, established Democrats lag behind both AOC, other younger progressives, and Democrats weary of political gamesmanship. Donald Trump won the White House in part by playing to voter's frustration with business as usual in Washington (as well as to darker motives). That frustration has yet to penetrate their bubble.

Matt Stoller, former blogger and Capitol Hill staffer, spoke to that tone-deafness in responding to the Politico story in a tweet thread. "Unless you've worked on the Hill, it's hard to convey just how weird these people are," Stoller begins. The culture is quite insular, and insiders distrust outsiders, Stoller writes, both quoting the Politico story and responding to it in the tweet thread. "It just messes you up psychologically to have to write law as a member of the Party of the People while also doing so without disturbing anyone who is powerful," Stoller explains:

There's this insane conflict-aversion. You only get to have an opinion if you are a 75 year annoying weirdo who obsessed over model UN in high school and is surrounded by yes-men eager to become lobbyists. Otherwise you don't understand the GOP are bad. https://t.co/Nmjuncacv2

This isn't just a corporate donor thing, it's a culture. People like @sethmoulton and Tim Ryan were in part rebelling against Pelosi as a statement that it is just annoying to have so many out of touch thin-skinned dork weirdos as co-workers. Remember, this is their job.

Yup. It's not just the House, though that is the most infected part of the party. It extends down to more than half of Dem voters. Older Dem voters despise intraparty conflict and see themselves as personally left-wing while voting against left-wingers. https://t.co/RgW7uCXFmc

Indeed, conflict aversion is evident even at my far remove. There is a certain "abused spouse" shyness born of years of being relentlessly hammered by right-wing media, a reluctance to be branded as radical in the next election cycle. As if Republicans won't brand even the most milquetoast centrist as a Nancy Pelosi socialist anyway.

The Democratic Party in many ways has all the institutional vigor of a men's fraternal organization. It is wedded to a culture of incumbency that rewards those — with or without talent — willing to toil in the trenches until it is finally their turn to take the reins. It elevates chummy political careerists, perhaps idealists to start, but ambitious enough to linger long enough to become institutionalized and thus everything voters hate, especially younger voters and non-voters.

Many among the new crop of freshman Democrats, perhaps AOC chief among them, grew up in the wild west of social media. They do not flinch from confrontation nor react to digital barbs without giving better than they got.

“Where the hell is the Democratic party?" former DNC chair Howard Dean told NBC’s Meet the Press after his party's 2014 shellacking. "You've got to stand for something if you want to win."

It took another four years and Donald Trump for a new generation of Democrats with spine to remind the rest of the party what spine looks like. Voters want to leaders who will actually fight for them, not just trot out the language for photo ops. Establishment Democrats being unnerved is just what's needed.

American Movie Classics yesterday ran A Man for All Seasons (1966). More striking than Sir Thomas More's determination to hold to his principles was the pressure brought to bear by court hangers-on for him to go along to get along. That's not winning elections these days.