When you're president, you can't do anything by @BloggersRUs

When you're president, you can't do anything 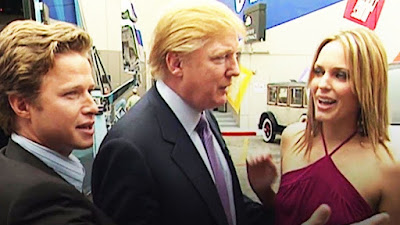 “When you’re a star, they let you do it. You can do anything,” Donald Trump said on tape, infamously, before winding up in the White House. He meant sexual assault. But assaulting a democratic republic?

No one has explained to the sitting president he is no longer the celebrity CEO of a small, family business where family members and sycophants follow his orders and cater to his whims without question. There are rules here. There are checks. (Sort of.) There are balances. (Sort of.)

Which is why a man accustomed to ignoring rules and getting his way unchallenged is losing in federal court. A lot. The Trump administration has lost in federal courts at least 63 times in two years, reports the Washington Post. Judges have repeatedly upbraided his administration for "failing to follow the most basic rules of governance."

Two-thirds of the cases accuse the Trump administration of violating the Administrative Procedure Act (APA), a nearly 73-year-old law that forms the primary bulwark against arbitrary rule. The normal “win rate” for the government in such cases is about 70 percent, according to analysts and studies. But as of mid-January, a database maintained by the Institute for Policy Integrity at the New York University School of Law shows Trump’s win rate at about 6 percent.

The loss-rate is virtually unprecedented. “It’s not just that they’re losing. But they’re being so nuts about it,” said Seth Jaffe, a Boston-based environmental lawyer who represents corporations in deregulatory cases, adding that Trump's losses have “set regulatory reform back for a period of time.”

Trump blames "Obama judges," naturally, not his administration's failure to do basic due diligence. In case after case, judges are united in finding the administration's efforts at implementing Trump's will ham-fisted and lacking legal justification:

Four judges, for instance, have rejected the decision to rescind the Deferred Action for Childhood Arrivals program, which has protected from deportation nearly 700,000 people brought to the United States as children. All four judges said essentially the same thing: that the government’s stated reason for ending DACA — that it was unlawful — was “virtually unexplained,” as U.S. District Judge John D. Bates, an appointee of President George W. Bush in Washington, said in an April opinion. A second explanation — that DACA creates a “litigation risk” — was derided by U.S. District Judge William Alsup in California as mere “spin.”

Three judges have invalidated the attempt to add a question about citizenship to the 2020 Census, the latest being U.S. District Judge Richard Seeborg in San Francisco on March 6. All rejected as unbelievable Commerce Secretary Wilbur Ross’s explanation that the move was intended to improve enforcement of the Voting Rights Act.

On voting rights in particular, an observation by Aaron Blake about Trump's approach reflects a kind of Republican politics that predates Trump's arrival:

Trump is by all accounts an impatient man who doesn’t have much regard for the “obstacles” that stand in his way. We’ve seen repeatedly how that’s meant hasty and sometimes aborted solo policy decisions, such as the complete withdrawal from Syria. Administration officials struggling to implement his often-unwieldy ideas may find it hard to justify them or to reason that even if they’re ultimately struck down in court, Trump will have gotten the coverage he wants.

This is precisely how "voter fraud" found a national audience on the right. Allegation after allegation of widespread fraud proved exaggerated if not imaginary, but only after blaring headlines reinforced in the public's mind that where there are smoke bombs there must be fire. The result is dozens of voter suppression measures passed across the country, litigated, and often struck down. No matter. Republicans will will have gotten the coverage they want. Democracy is undermined. Because the only good democracy (they cannot control) is a dead one.

That form of "untruthful hyperbole" was a feature of Republicans astroturfing a market for imaginary problems before Trump. On Wednesday, David Corn responded in a tweet thread to an attempt by George W. Bush administration flack Ari Fleischer to rewrite the history of WMD hysteria and the Iraq invasion — another manufactured crisis that resulted in the worst American foreign policy blunder in memory.

Truth was a casualty in America before Trump, but it took a malignant narcissist from a minor crime family to turn an entire administration into one.

The one saving grace (so far) of this fiasco of a presidency is its failures at governing should put to rest any notion that electing a rich CEO as president is the way to get things done in Washington. It won't. Howard Schultz proves that.