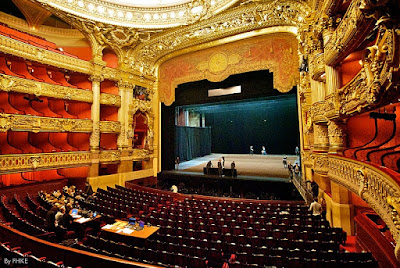 Interior of the Palais Garnier, showing the stage and auditorium, via Wikimedia Commons/Flickr (CC BY-SA 2.0).

The Mueller Impeachment Referral made clear the Office of Special Counsel (OSC) viewed the behavior of the sitting president as prosecutable. Just not now. The Justice Department's standing Office of Legal Counsel (OLC) policy is that a sitting president cannot be indicted. Under Attorney General William Barr, that policy has an ice cube's chance in hell of changing.

Senator Elizabeth Warren announced Friday, she believes, “Mueller put the next step in the hands of Congress: ‘Congress has authority to prohibit a President’s corrupt use of his authority in order to protect the integrity of the administration of justice.’ The correct process for exercising that authority is impeachment.” But as a senator, she is in no position to launch an impeachment inquiry.

On MSNBC's All In on Friday night, Rep. Ted Lieu (D-Calif.) argued, as other Democrats have, that the redacted Mueller report is not enough to initiate an impeachment inquiry. The House Judiciary Committee has issued a subpoena for an unredacted version of the referral. In what feels like a bluff, Democrats argue they need the complete record first. Democrats who might consider impeachment want to prepare a slam-dunk case and build public support before initiating an official inquiry. That will take time if it ever happens.

Rep. Sean Patrick Maloney (D-N.Y.) is not one of those Democrats. He argued with MSNBC's Joy Reid that impeachment might "feel pretty good" but is "counterproductive." While peppering his appearance with calls for nonspecific "accountability," Maloney suggested the "most efficient," the "chess not checkers" remedy is for the public to strap in for 21 more months of Trumpish atrocities and hope Democrats replace him in 2020 [timestamp 15:40].

The press is aroused about sending correspondents to the opening night of Impeachment Theater. Meanwhile, the Trump administration and the Barr Justice Department are working to stall until 2020, hoping to run out the clock both on impeachment and the statute of limitations on obstruction of justice.

No one is discussing resignation.

For the good of the country, Trump needs to leave the White House. Expeditiously. I am not sectarian about how that happens.

Is there any way to leverage him out? Pressure him to resign? A way to make staying worse than leaving? Make him a deal? (He understands deals.)

Right now, Democrats anxious to get impeachment rolling are like the dog chasing a car who won't know what to do with it once he catches it. If unsuccessful, they have made a stand on principle they'll tell their grandchildren about. And still have Trump until 2020 and maybe longer. If successful, they will have President Mike Pence who will simply pardon Trump with Richard Nixon as precedent. With Gerald Ford as precedent, Pence will be gone in 2021.

If Trump can be induced to resign sooner than all that, he will pardon himself, or Pence will, angering those truly committed to justice even more. But he will be out of the White House. It is a long shot maybe, but not one to write off out of hand. Right now, talking heads do not consider that an option.

As I wrote Friday:

What is at stake is whether this country is still a nation of laws or of men. Or of one man, to be precise. The burden of defending that principle and their oaths to the Constitution falls not only on the Democrats and a House impeachment inquiry, but on Trump's Republican colleagues. House Minority Leader Kevin McCarthy and Senate Majority Leader Mitch McConnell have a duty to schedule an Oval Office conversation to recommend Mr. Trump resign, whatever the personal consequences, for the good of the country.

The Mueller Impeachment Referral demonstrates the only thing stopping the sitting president from committing even more prosecutable crimes between now and his leaving office is people around with enough vestigial integrity to say no to him, to ignore him, or to talk him out of it. However little integrity Republican members of Congress may display, that is no reason they get a pass. If you live in a state with a GOP senator, or in a district with a GOP congressman, put their feet to the fire. Demand they pressure Trump to resign.

Don’t tell me demanding GOP members of Congress uphold their oaths is pointless or else get on board with Democrats arguing impeachment is pointless because they won’t have the votes in the Senate.

There have been three impeachment inquiries in the history of this republic, including for Nixon (even though he never faced trial in the Senate). Two of them have been in my lifetime. I'm not sure I want to see a third in my lifetime, regardless of Trump's perfidy.

There is much social media chatter about Nancy Pelosi's comments on impeachment. Democrats have no guts. What are they waiting for? Democrats have a duty to the Constitution and to the rule of law, etc. The news coverage is all about relative political advantage in impeaching or not to. I get that. But they also have a deeper duty.

Trump has abrogated every political norm his grubby hands have touched. I worry that a third impeachment inquiry within a half-century will establish a new norm — that Americans are now in the habit of impeaching their presidents. That might do more long-term damage to the republic than anything Trump has done in his 2+ years. Trump and his band of thieves are a cancer that eats at the republic every day he remains. It needs removing as expeditiously as practicable. But I fear we could kill the patient if we are not careful about how we remove it. I am more interested in saving our nation of laws from autocracy than in making a moral statement or in beating Donald Trump at the polls in 2020. We should not foreclose any option.

Maybe my worry is exaggerated, but it's my worry.

Justice beyond the reach of a pardon will follow Trump home to New York.