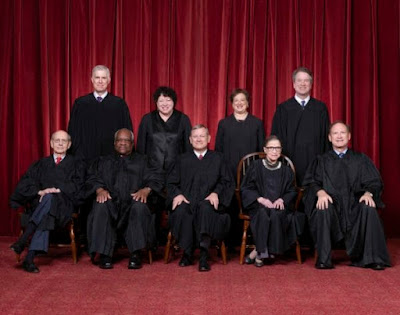 "It is a dispute over who counts in America," writes Mark Joseph Stern for Slate. The Supreme Court case over how the U.S. conducts its next decennial census is literally, fundamentally, about who America counts.

Critics and plaintiffs contend the Trump administration's adding a citizenship question to the census will depress the count by at least 5.1 percent (with 11.9 percent a high estimate) as immigrant communities shy away from census takers. That is its underlying purpose, critics charge.

In his 277-page January ruling against the question's inclusion, U.S. District Judge Jesse Furman decided the Trump administration had violated the law six different ways in adding the citizenship question, Stern writes. The justices heard arguments Tuesday in the government's appeal. The implications of the case for billions in federal funding across the land, and for tilting representation away from immigrant-heavy cities and states, will carry forward a decade or more.

In questioning attorneys, Stern alleges conservative justices "deployed credulity and hypocrisy in equal measure," appearing to favor overturning Furman's ruling in favor of Secretary of Commerce Wilbur Ross's contention that the question meant to help the Department of Justice enforce the Voting Rights Act (the law justices gutted in 2013's Shelby County v. Holder). Federal officials in fact have enforced the Voting Rights Act for half a century "without needing block-by-block data on the citizenship of the residents."

Furman ruled “the evidence is clear that Secretary Ross’s rationale was pretextual,” a "sham," and a violation of the Administrative Procedure Act. Furman believed Ross concealed the real reason behind adding the census question. Ross had asked the DOJ to provide a rationale for inserting the question.

But on Tuesday, court conservatives seemed prepared to ignore that and the three lower courts that had ruled against the Trump administration. Chief Justice Robert appeared to follow the "see-no-evil, hear-no-evil pattern" he set in Trump v. Hawaii, and simply presume Ross followed the law, Noah Feldman writes at Bloomberg.

From a legal standpoint, Ross’ behavior is puzzling: The Constitution mandates the “actual enumeration” of people, not citizens; a citizenship question only makes that goal more difficult to accomplish. From a political standpoint, though, the secretary’s behavior is perfectly rational. If Hispanics and immigrants are undercounted, blue states like California will lose billions in federal funds, seats in the House of Representatives, and votes in the Electoral College. Yes, some diverse red states, like Texas, will be affected too. But the burden will fall primarily on urban areas where minorities and noncitizens live—areas, in other words, that lean Democratic. Rural regions populated primarily by whites—that is, Republican regions—won’t suffer. These rural, Republican regions will gain seats in the state legislature, while urban, Democratic areas will lose them.

From the calculus of a pure power grab—constitutional commands be damned—Ross, then, had no reason to listen to the experts who counseled against the citizenship question, and simply overruled them. So he ran roughshod over a series of legal obligations meant to limit the addition of unnecessary questions to the census—rules laid out by Congress, which the secretary ignored. Thus, not only did Ross conceal the real reason for his action, but he also repeatedly broke the law in his mad dash around statutory roadblocks designed to keep gratuitous and counterproductive questions out of the census. (To give two of many examples, Ross missed the deadline to report a new census question in Congress, and failed to comply with a requirement that the secretary exhaust all other options for data gathering before adding “direct inquiries” to the census.)

The census case is yet another gambit by Republicans to undercut the voting strength of populations that lean Democrat. "Defund the Left" is on its way to becoming "Depopulate the Left." Just in North Carolina, if there's an election-rigging scheme state Republicans haven't tried, they haven't thought of it yet. Undercounting non-citizens in the name of protecting against minority-vote dilution is a national version of the same cynical, anti-democratic, anti-American strategy by an extremist political party for preserving white power against demographic decline.