The party of white, male landowners by @BloggersRUs

The party of white, male landowners 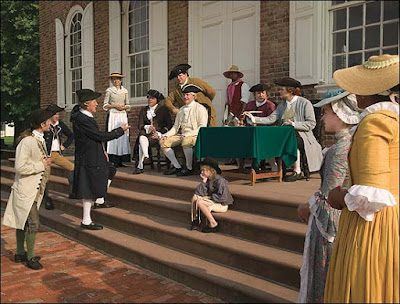 In a unanimous ruling Thursday, a three-judge federal court struck down nearly thirty of Michigan's voting districts as partisan gerrymanders "of historical proportions." The ruling affects nine of the state’s 14 congressional districts as well as state House and Senate districts. The court ordered special corrective elections next year for some state seats and new congressional districts for the 2020 elections. Republican Senate Majority Leader Mike Shirkey announced within hours the Senate would appeal the League of Women Voters v. Secretary of State Jocelyn Benson case to the U.S. Supreme Court.

"The Enacted Plan was devised with discriminatory intent," the court wrote in its ruling. "[T]he predominant purpose of the Enacted Plan is to subordinate the interests Democrats and entrench Republicans in power by diluting the weight of Democratic voters’ votes."

The case featured evidence — including emails between the GOP staffers in charge of drawing the maps – that was notable for how explicitly the partisan intent was spelled out. In one email, a staffer bragged that a map was “a glorious way that makes it easier to cram ALL of the Dem garbage in Wayne, Washtenaw, Oakland, and Macomb counties into only four districts.”

Another staffer cheered that a map that the Michigan Republicans were drawing was “perfect” because “it’s giving the finger to [S]andy [L]evin,” referring to a Democratic U.S. House member in the state.

The court ordered the legislature and the governor to enact new maps by August 1. Should they fail, "the Court will draw remedial maps itself," a move mirroring the court order in North Carolina.

Gerrymandering is only one front in the GOP's war on the American voter.

In Washington, the Trump administration hopes the Supreme Court will uphold the addition of a citizenship question to the 2020 census. The administration ignored "a unanimous warning from Census Bureau professional staffers" that including the question would result in an undercount, writes former U.S. attorney general Eric Holder in the Washington Post. Holder and others believe the effort is, like gerrymandering, a deliberate attempt to undermine the voting strength of left-leaning voters to Republican advantage:

A targeted undercount would shift political representation and critical federal support away from areas with large populations of people of color, immigrants and Latinos.

Republicans will also likely attempt to use citizenship data to further shift power to their political base within the states. In 2016, the Supreme Court’s decision in Evenwel v. Abbott left unanswered whether states could draw congressional and state legislative districts based solely on the number of citizens, not total population, as it is currently done. Lawmakers and officials in Arizona, Missouri, Nebraska and Texas have already indicated they might use citizenship data this way.

Democrats in New Hampshire's the state legislature are attempting to repeal a Republican election law passed to make it harder for resident college students to vote. Democrats and other plaintiffs hope a lawsuit will block another new law impacting voter registration procedures.

"They sought information from the voter database to make their case," reports the New Hampshire Union Leader, "and last year Republicans passed a bill specifically precluding the release of voter information under those circumstances."

Florida voters last fall passed a constitutional amendment restoring voting rights to felons who have “complet[ed] all terms of [their] sentence.” Now, Republicans there are trying to thwart that clear voter intent by making it more difficult for them to do so, Michael Morse writes in the South Florida Sun-Sentinel. They are taking advantage of courts' habit of tacking on fines and fees to convictions to include payment of all fines under "terms of sentence."

The Republican-dominated Legislature has tried to hang Amendment 4 by its own advocate’s words. When the campaign went before the state supreme court to qualify for the ballot, it explained to the seven justices that “completion of sentence” meant that the payment of fines and fees were also required to vote. The campaign has since called that concession a mistake. Regardless, the amendment’s general language offers a cautionary tale about how the many metastasizing consequences of the carceral state can complicate well-intentioned efforts at reform.

Although a fragmented criminal justice system has made data collection difficult, my previous research using court records in Alabama found that the typical ex-felon faced a staggering bill of about $4,000 in fines and fees. Perhaps recognizing the potential impact, the ACLU of Florida, which helped draft Amendment 4, has tried to offer a saving construction to the legislature. They have suggested that “fees not specifically identified as part of a sentence . . . are therefore not necessary for ‘completion of sentence’ and thus, do not need to be paid before an individual may register.”

But that will have to get by a Republican legislature and a Republican governor. What this effort amounts to, says Morse, is the criminalization of poverty.

Add these cases to the litany of creative, devious, and sometimes surgically precise means by which Republican lawmakers from coast to coast hope to synthesize indefinite control by rigging elections in their party's favor. Russian assistance is simply gravy. The slippery slope the GOP has greased leads, if not to autocracy, towards rule again by white, male landowners. Just as the sainted founders originally intended.