Of course, they did by @BloggersRUs

Of course, they did 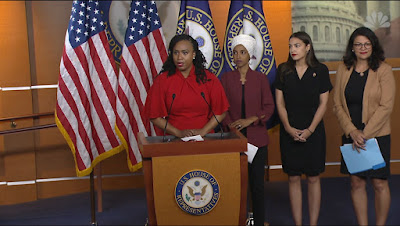 “Political jihad is their game," the post said. "If you don’t agree with their socialist ideology, you’re racist.”

“The recent social media post coming from the IRCCA does not reflect my values or the Illinois Republican Party’s values,” Schneider said in a statement. “My intense disagreement with the socialist policies and anti-Semitic language of these four congresswoman has absolutely nothing to do with their race or religion. I urge everyone who opposes them to keep the rhetoric focused on policy and ideology.”

The acting president (and Republican surrogates) has focused attacks on the four women for over a week, perhaps to knock the Jeffrey Epstein scandal off the front pages. The scandal involving sex-trafficking of underage girls could yet implicate several other prominent men from Trump's social circle.

Pressley urged Americans a week ago "to not take the bait."

As for the socialism charge, the GOP might have chosen Bernie Sanders or Elizabeth Warren if they wanted to attack socialists, one Twitter user offered. Instead, "they picked Black and Brown women ... to gin up the base."

The party followed its Southern Strategy from "ni**er, ni**er, ni**er" to racist dog whistles, to birtherism, to "palling around with terrorists," and finally to a Republican demagogue psychologically and morally unfit to be president who has repurposed the Red Scare as a brown one.

The self-professed party of family values fell right into line behind him. "Small government" conservatism was a sham, as was the party's pretensions of fiscal responsibility. Only a few deficit dead-enders are left. What the GOP base really wanted was a racist P.T. Barnum. When they finally got one, the rest fell away like a stripper's dancewear. Bigotry is all that's left underneath.