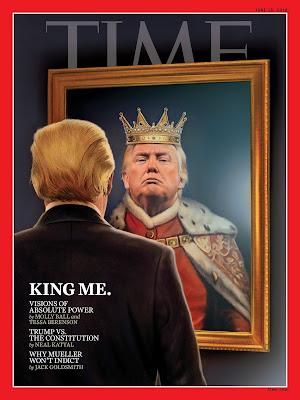 Nobody could have seen this coming, right?

Attorneys working for the acting president filed a lawsuit Thursday asserting that a sitting president cannot “be investigated, indicted or otherwise subjected to the criminal process',” Period. Not by federal, state or local authorities for as long as he holds the presidency. Ponder that in all its implications.

Donald Trump's lawsuit is aimed at stopping Manhattan District Attorney Cyrus Vance from enforcing a subpoena against Trump’s accounting firm, Mazars USA, to produce eight years of his personal and corporate tax returns. Trump's attorneys argue that because the action against Mazars is an attempt "to criminally investigate a sitting President, it is unconstitutional.”

“It cannot be the case that, as a matter of law, everybody associated with the president is immune from criminal investigation while he’s the president. But taken at its fullest, that’s what the president’s argument is,” Rosenzweig told VICE News.

Vance, who agreed not to enforce the subpoena—issued to Trump’s longtime accounting firm Mazars USA—until a scheduled September 25 hearing, is investigating if executives at the Trump Organization filed false business records concerning hush money payments to adult film star Stormy Daniels and former Playboy model Karen McDougal, who both claim to have had affairs with Trump, charges he, naturally, denies. The president’s former fixer, Michael Cohen, admitted to arranging the hush money payments and released audio of him discussing the Daniels payment with Trump.

It is just the latest in a series of lawsuits Trump has filed to keep his finances secret. He has sued congressional Democrats to keep them from obtaining his tax records which, by law, the chairman of the House Tax Committee may request from the IRS for any citizen. Trump has sued the state of New York over the TRUST Act, passed this year. Upon request, the state may release tax records of New York citizens to several congressional committees. New York's records would include copies of Trump's federal returns.

The latter suit Trump filed in a District of Columbia federal court before judges Trump appointed. New York's attorneys argued this week before U.S. District Judge Carl Nichols, a Trump appointee, that the case should be dismissed. It belongs in New York's courts. The case could stretch on for months. Winning cases through “delays, evasions, and lies,” was a Roy Cohn tactic Trump has used effectively.

Democrats requested Trump's federal records in April but have yet to request records from the state of New York. Trump filed a lawsuit against New York anyway.

Trump may be an idiot, but he's an idiot with a preternatural knack for gaming the courts and dodging taxes. He and his family have done so with near-complete impunity for decades. In this fight, Democrats are but learners. Trump is the Master.

Federal prosecutors are barred from issuing an indictment of a sitting president by Department of Justice policy. Now Trump asserts presidential immunity extends to state investigations of him and of any firms with which he and his organization have done business. He is above the law. He is The Law.

The House Intelligence Committee will have to take the Trump administration to court to get access to a whistleblower complaint filed through formal channels by a U.S. intelligence official. Details are sketchy, but a "promise" made by Trump to a foreign head of state raised national security concerns. The whistleblower, Joel Mathis writes at The Week, is "officially saying the government should protect itself from the president."

By statute that “urgent concern” ought to have been transmitted to congressional intelligence committees. Trump's acting director of national intelligence, Joseph Maguire, blocked the intelligence community's inspector general from releasing the report to Congress. Congress will have to take Trump to court. Trump himself views court action the way medieval lords viewed moats and boiling oil as ways for slowing down attackers.

Mathis sums up our plight:

This complaint may also represent the federal bureaucracy's last stand against the president. Unless the House of Representatives switches course and suddenly impeaches Trump — and there is little sign of such a development — there is no one else to step forward and save America from him.

We are watching this amoral, corrupt, emotionally stunted megalomaniac turn the government of the United States into a branch of the Trump Organization. He is stepping over and through Washington bureaucracy like H.G. Wells' Martian tripods, crushing normality as he goes, stopping here and there to raise his cell phone and fire a Twitter heat ray. He has proven as impervious to our usual weapons as Democrats are to the fact their usual weapons don't work against him.

The idea we might have to wait for some political version of common bacteria to end the destruction of a republic that survived the Civil War is not at all reassuring.

Ponder again what it means that Trump believes that so long as he holds the presidency he is untouchable.