"In search of a balcony" by @BloggersRUs

"In search of a balcony" 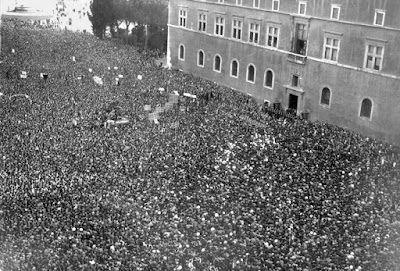 The Trump administration is not a full-fledged dictatorship. Not yet. Imperious, yes. Imperial, certainly. His best friends are dictators. He wants to be one of them. He is El Caudillo del Mar-a-Lago, mocks Esquire's Charlie Pierce. But as devoted as his presidential acolytes may be, as steeped in resentments as his authoritarian followers are, there are signs the country is not prepared to tip itself over into dictatorship. Not yet.

Trump's public admissions in documents and on camera that he tried encouraged Ukraine to investigate a political rival and his double-down invitation to China to do the same have eroded his support and triggered a full-on impeachment inquiry. He wants help ginning up evidence that foreign governments (other than Russia) criminally interfered with the 2016 elections while at the same time criminally inviting other countries to do the same in 2020. Even Fox New polling is turning sour on Trump. 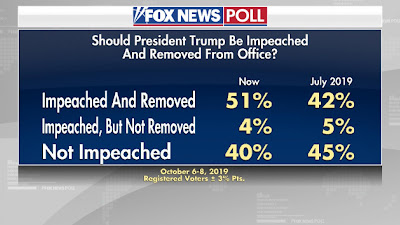 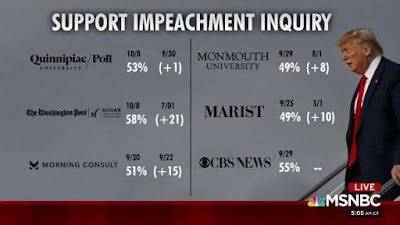 Naturally, Trump is lashing out. At the press. At whistleblowers. At Democrats. Trump's New York lawyers claim, MSNBC's Rachel Maddow observed, the president cannot be criminally investigated; impeachment is the only constitutional tool for removing a president. Meanwhile, his White House lawyers argue impeachment is "constitutionally invalid."

Trump would be dictator already if he were not so bad at it.

Now Trump has given Turkey the green light to lash out at the Kurds, American allies in the fight against ISIS. He is alienating Republican allies in Congress and U.S. troops. Trump is in a hole and refuses to stop digging.

The Week's Joel Mathis wonders aloud what I have asked before: Is there a way to get Trump leave office peaceably? Even were the Senate to convict him, Mathis suggests he might not leave unless "dragged from the Oval Office, kicking and screaming."

Trump has long fancied himself the ultimate dealmaker, and while that reputation is almost certainly overblown, appealing to his vanity might actually benefit the republic. Given a choice between being removed from office and a deal that lets him save face — or, at least, stay out of jail — there is a good chance that Trump could take the latter option, then proclaim victory in public.

Given the growing mounds of evidence against him, however, Democrats probably won't want to let Trump off the hook so easily. Trump's critics will want him to pay, legally and socially, and understandably so.

But it still might be better to make a deal.

Things could get worse before they get better, Josh Marshall observes:

Green lighting a Turkish invasion of northeastern Syria is a shameful act and will lead to great bloodshed. For the US there’s another dark dimension. This was about lashing out over impeachment and the president proving he has the power to inflict harm. It’s only the beginning.


As we demand Republicans in Congress put their country before their party, those on the left ought to put the country's survival above our need to see Trump frog-marched out the front gate of the White House.

Even if Trump pardons himself or blackmails President Pence into doing it, he will still face state charges that could bring down his commercial empire. Once he is out of office and discredited, his utility to Russia and money launderers will all but evaporate as will the value of the Trump brand. All that will remain is the hand clapping and the shouting.

But we will have dodged dictatorship, at least, with this "small man in search of a balcony," as Jimmy Breslin once described Rudy Giuliani. The frightening part is Trump has prepared the way for someone else.