"He should not have to worry that the leader of the free world, the commander in chief goes on television and suggests maybe execution is the right consequence for his playing by the rules and doing the right thing as an exercise of conscience. It's extraordinary and it's an abomination really." - Preet Bharara 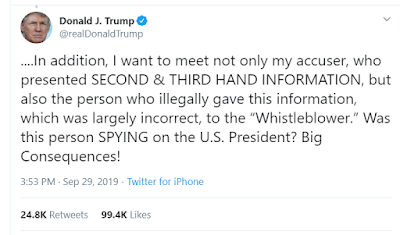 Back in September I asked Former US Attorney, SDNY Preet Bharara this question here on Hullabaloo, How will the WH mob avoid prosecution for witness tampering?

He and Anne talked about it in the October 1 Cafe Insider episode. Preet, calling Trump's threat to the whistle blower "an abomination." Anne was disgusted by it, saying, that is what dictators do. ( Here's a longer audio link on whistle blower from the show, 2 minutes 23 seconds.)

But what I really want to know, from former US Attorneys who know politics is, "Will Trump be charged for threatening the whistle blower and witnesses?"

I want someone to answer questions like:
Does the witness tampering statue apply to whistleblowers?  What about the others in government who gave the whistle blower information?

I sent Preet this letter below and I even left a voicemail message asking the question. I'm not looking for just a legal response.  I see how Trump works. Threatening people is what he does. And I think he'll get away with it using all his tricks and legal dodges.

Below I point out HOW Trump will try to do it, how he will try to normalize what he does and ask what we can do about it.

I'm very much interested in how powerful people intimidate others and what it takes to withstand them. I want to know methods the less powerful can use to fight the effectively. Then I want to see examples of the people making those threats suffering negative consequences for using them.

NOW the detailed questions. Because you are lawyers I threw some links to the statute, but since you talk about politics I have some questions about the realities of making charges. I've heard former US Attorney Barbara McQuade @BarbMcQuade answer some of these on Rachael Maddow, but I want to hear your thoughts.


I've seen the right wing media spin the President's threats as no big deal, just "tough talk" I have a few questions:

(It looks like witnesses can sue for being harassed. Would this apply to the President after he was out of office? Does it apply to Senators and Congress people? (1737. 18 U.S.C.1514, (CIVIL ACTION TO ENJOIN THE OBSTRUCTION OF JUSTICE ) Link to Justice Dept.)
I looked at the Justice Department statues on tampering with witnesses and informants and it seems to cover a number of proceedings.
1729. PROTECTION OF GOVERNMENT PROCESSES -- TAMPERING WITH VICTIMS, WITNESSES, OR INFORMANTS -- 18 U.S.C. 1512  (Link to Justice Dept statue.)


It applies to proceedings before Congress, executive departments, and administrative agencies, and to civil and criminal judicial proceedings, including grand jury proceedings.

I  also looked at who it applies to:


Section 1512 protects potential as well as actual witnesses. With the addition of the words "any person," it is clear that a witness is "one who knew or was expected to know material facts and was expected to testify to them before pending judicial proceedings."

I've seen that lawyers try to dismiss or invalidate charges of threatening witnesses.Based on what we know about Trump and his defenses, I count at least eight ways he will avoid the charge and run out the clock. Here's my list, are there others? How do prosecutors get around these?

BTW I like this comment from an analysis of the case: "The more imaginative types of witness tampering as well as forms of tampering defying enumeration were still prohibited by the omnibus provision of § 1503. United States v. Lester, 749 F.2d 1288 (9th Cir. 1984)."

I would like you and Anne to discuss the legal tricks, word choices and questions about intent that will be used by Trump to avoid being charged with witness tampering. Avoiding being charged with crimes is one way the President wins politically. Delaying testimony by threatening witnesses is another.

Trump has gotten away with threatening people his entire life, with Bill Barr, his Attorney General on his side, will he get away with it this time too?