Below is how Face the Nation identified Petraeus on January 5th. They didn't identify the company he works for, Kohlberg Kravis Roberts & Co, nor his title: David H. Petraeus, Member, Chairman of the KKR Global Institute 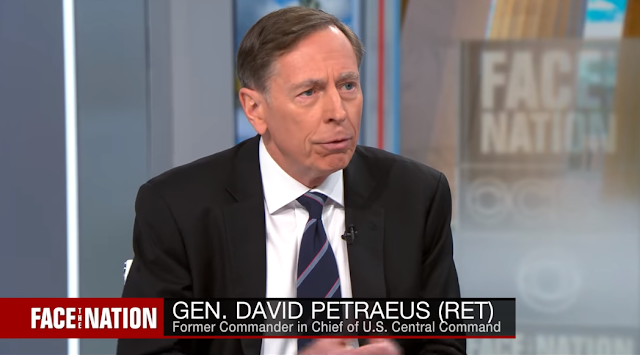 Last week I predicted that the cable news shows would book "retired" generals to talk about how to respond to Trump's assassination of Iran's General Soleimani but would fail to inform viewers if they worked for firms that would profit from war. Here was my piece:

To all MSM producers: Tell us who pays the war experts you are booking now

It wasn't a hard prediction to make. I linked to a Lee Fang article from the Nation in 2014 Who’s Paying the Pro-War Pundits? Today Lee Fang, (now at the Intercept), identified some of the same retired generals who went on TV and the failure of the media to disclose their ties to defense contractors.

It's not a surprise when Fox News does this, but we should expect more from CBS's Face The Nation, NBC’s “Meet the Press, NPR's Morning Editon with Steve Inskeep, and Public Radio International's The World .

In my piece I suggested that we should contact the producers of the cable shows to remind them to disclose the ties of these people. What I neglected to do was provide a way to do that. You could use the"Contact Us" link for an email.  but who knows who that goes to. So I looked up producers who work on Face The Nation from their "About Us" and added their twitter handles.


It's not like who Petraeus works for is hard to find. KKR is proud he works for them, why don't they want his title and employer in the chyron at Face The Nation? David H. Petraeus, Member, Chairman of the KKR Global Institute

If the producers want to be through and verify KKR has invested in defense firms here are links to two stories.  KKR Completes $1.2B Buy of Airbus Defense Electronics Business

The producers of these shows have been busted in the past for failing to disclose that the "retired generals" aren't living off their military pensions. When one of these "retired generals" talks about the need for a strategic missile strike vs boots on the ground, we should know that they work for the company that makes the missiles.

I know at least one of the people on the list will read this piece (probably a broadcast associate since they do the real work of background research for guests), please look into people who talk about options besides war and historical deescalation of wars. It would be a nice switch from the usual suspects.
.