Above the law by @BloggersRUs 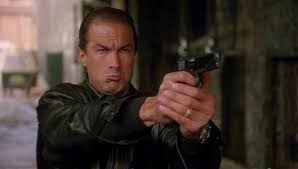 Stunning among other stunning statements Attorney General William Barr made Wednesday before the Senate Judiciary Committee was his blithe declaration that the president is above the law.

Responding to questioning by Sen. Patrick Leahy (D-Vt.), Barr claimed repeatedly Donald Trump had been "falsely accused" of coordinating with Russia. Deploying the "no underlying crime" red herring, Barr asserted that the president as head of government and the Department of Justice was entitled to close down an investigation into himself if he felt it was off the rails:

Barr said this situation was unique because the president has the “constitutional authority to supervise proceedings,” and if he feels a proceeding was “not well founded” or “groundless,” he could legally shut it down.

“The president does not have to sit there, constitutionally, and allow it to run its course,” Barr said. “That’s important because most of the obstruction claims that are being made here . . . do involve the exercise of the president’s constitutional authority, and we now know that he was being falsely accused.”

Wild from Barr: If the president feels a proceeding is unfounded, "the president does not have to sit there constitutionally and allow it to run its course. The president could terminate the proceeding and it would not be a corrupt intent because he was being falsely accused." pic.twitter.com/SMpiIXia92

As Marcy Wheeler (emptywheel) tweeted repeatedly during the proceeding, Barr never specified what details in the Mueller report he repeatedly mischaracterized were false. Democrats never pressed him to name them.

What the Mueller Impeachment Referral found — after failing to get Trump to sit for an interview — was there was not enough evidence to bring formal conspiracy charges provable in court. Details such as what became of the Trump campaign internal polling data Paul Manafort gave to a suspected Russian intelligence asset and what Roger Stone's campaign role was in coordinating with Wikileaks on releasing stolen emails remain muddy. As is whether Trump's conduct in dangling pardons before his associates obstructed Mueller's finding out. But there was plenty enough misconduct, Mueller suggested, to launch an impeachment investigation.

The report states, "[W]e were not persuaded by the argument that the President has blanket constitutional immunity to engage in acts that would corruptly obstruct justice through the exercise of otherwise-valid Article TI powers. 1091" (Pg. 178, Pt. II) Footnote 1091 refers to impeachment as a remedy.

The always-caustic Rick Wilson predicted Barr's move before he made it, warning Tuesday evening that with his knowledge of Washington's "folkways and expected behaviors" he has twice lulled Democrats into thinking he is a rational, pre-Trump Republican. They clearly haven’t caught on that he is not. Perhaps Wednesday disabused them. Wilson cautions, "Impeachment for [Trump] is reality TV catnip ... Once it fails, he’s free to rape and pillage the remains of Washington." Wilson declares, "The GOP is Trump now, and Trump is the GOP."

Amoral leaders have a way of revealing the character of those around them. Sometimes what they reveal is inspiring. For example, James Mattis, the former secretary of defense, resigned over principle, a concept so alien to Mr. Trump that it took days for the president to realize what had happened, before he could start lying about the man.

But more often, proximity to an amoral leader reveals something depressing. I think that’s at least part of what we’ve seen with Bill Barr and Rod Rosenstein. Accomplished people lacking inner strength can’t resist the compromises necessary to survive Mr. Trump and that adds up to something they will never recover from. It takes character like Mr. Mattis’s to avoid the damage, because Mr. Trump eats your soul in small bites.

Giving silent assent as Trump lies about what “everyone thinks” and offering up the fawning praise he demands, Comey writes, slowly "pulls all of those present into a silent circle of assent" until they are lost. Comey may be sanctimonious, but it doesn't mean he is wrong.

Republicans, the party of wealth and the "petite bourgeoisie" have found their mad king in Donald Trump. I have long written that the royalist strain among us, present since before the Revolution, has never slept far below the surface. That sleeping desire for absolutism has awakened.

Comey is not alone in seeing how it has overtaken us bite by bite:

He slipped several times, but the biggest slip seemed to be planned. Barr argued that Trump (or any president) could shut down an investigation into his own crimes, by simply declaring himself “falsely accused.”

Barr is a monarchist. Trump is the GOP’s king.

Fascism, Stalinism, monarchy, despotism - all names for what fills the void when democracy is dismantled. It’s what self-dubbed “libertarians” meant to do all along.

Getting government-by-the-people out of the way, piece by small piece, until the vacuum opens and government-by-ONE-person rushes in to fill it.

It’s been the GOP right-wing’s project for decades. And it was inevitable that foreign enemies of democracy co-opted it as their own.

This is a perilous moment. Best to make yourselves heard and felt.