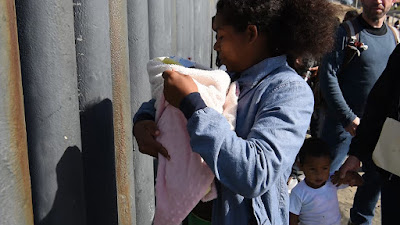 A father and daughter drowned June 23 trying to cross the Rio Grande into Texas from Mexico. Oscar Alberto Martínez and his two-year-old daughter Valeria made it across safely when he turned back to help his wife cross. Seeing him leave, Valeria jumped in after him. Martínez was able to reach her and put her inside his tee shirt to stay together, but the current swept away both to their deaths. They were found later face-down in shallow water, the girl's arm still wrapped around her father's neck.

The Salvadoran family had been unable to present themselves as asylum seekers at the U.S. border. The AP photo of their bodies, taken Monday, evokes the image of the three-year-old Syrian boy found washed up on the beach on the Greek island of Kos in 2015. Alan Kurdi's attempt to flee Syrian violence with his family similarly ended in tragedy. They were hoping to reach Canada.

The Trump administration portrays refugees from Central America as criminals or economic migrants ineligible even to request asylum, much less win it. Its treatment of separated children held in appalling conditions in, essentially, concentration camps erected along the border testify to the cruelty of Trump's myopic ethno-nationalism. But more regional forces are at work in driving people north from their homes. Migrants in the Americas are headed south as well.

A report from the Center for American Progress portrays the migrant flow as part of a hemispheric problem. The problem, Greg Sargent summarizes in the Washington Post, is much bigger than than the one at the U.S. southern border.

CAP reports "the movement of displaced persons within South America vastly exceeds northbound migration from Mexico and Central America toward the United States." Over 1.3 million Venezuelan nationals have fled their homeland for Columbia, Peru, Argentina and Brazil. Once prosperous Venezuela's economy is in collapse, making it "the No. 1 country of origin for those claiming asylum in the U.S." In spite of branding the government of Venezuelan leader Nicolas Maduro an oppressive dictatorship, Trump has increased deportations of Venzuelans.

"In the Northern Triangle—and in Guatemala especially—drought and crop disease have created an epidemic of hunger in communities that were already living at or near subsistence levels," CAP finds. Climate change is disrupting regional agricultural patterns that once sustained many communities. "Drought and irregular rainfall—have increased food insecurity and devastated livelihoods across the region." In the Caribbean Basin, Trump's efforts to punish Cuba's economy combined with more damaging hurricane seasons threaten to restart the flow of “boat people” to U.S. shores.

Those conditions could get worse. As the report notes, it’s plausible that future events — further political deterioration in Venezuela, a major climate disaster in Central America — could “significantly exacerbate migration dynamics in the Americas.”

This is a crucial point: It underscores the folly of imagining that tweaking a few laws, or making it harder to apply for asylum, or ramping up the cruelty, or building walls is enough to make a difference. The long-term challenges demand much more from us.

The Trump administration's sticks-only approach adding to the humanitarian crisis on the border with Mexico is not only cruel, cost-ineffective, and failing. It is woefully inadequate to the task of preparing for and ameliorating what could become a hemisphere-wide and global crisis the acting president's head-in-the-sandbox nationalism will not solve. Failing to assist neighbors to the south in addressing the drivers of migration is not American leadership, but retreat from it. The result will be greater instability across the hemisphere. And we already have more instability than we can manage sitting in the Oval Office.