Cult of executive authority by @BloggersRUs 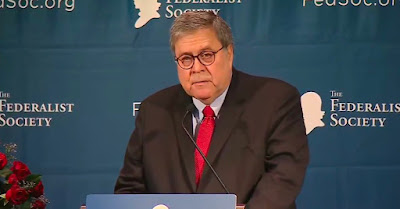 Attorney by day, amateur physicist by night, Attorney General William P. Barr proves the existence of parallel universes by living in one.

Barr visited the high temple of royalist sentiment Friday night to deliver a speech to the Federalist Society, Petri dish for the unitary executive theory and conservative judicial nominees of the caliber of Justice Brett Kavanaugh. You'll find the text (handily) on his department's web page.

Barr advocated for an imperial presidency, arguing, as reported by Business Insider, "for why the chief executive of the country is protected from laws that apply to every other citizen — a legal theory known as unitary executive theory that former Vice President Dick Cheney used as a justification for many executive actions following 9/11."

If the acting president needed a distraction from a truly terrible week, he got one.

A clip from the speech blew up social media when it surfaced:

AG Bill Barr: "It is the left that is engaged in the systematic shredding of norms and undermining the rule of law." pic.twitter.com/tX7pmHBhNK


University of Texas Law Professor Steve Vladeck provided an excerpt and this commentary:

It’s not just that the Attorney General of the United States said these things; it’s that his audience at the @FedSoc convention gave him a standing ovation for doing so.https://t.co/3HrUMpIhar

The executive power passages were deeply hypocritical; this is downright offensive. pic.twitter.com/SFys3u6Zs6


Speaking as a scion of the party of waterboarding and systematic obstruction of justice, Barr added, "For these reasons, conservatives tend to have more scruple over their political tactics and rarely feel that the ends justify the means." In Barr's parallel universe, "rarely" means regularly.

A sampling of social media chatter from the left-of-center:

I read Bill Barr’s speech to the FedSoc just now. I think it is best delivered while wearing a uniform and mirrored shades, and while standing on a balcony.

Bill Barr is the type of bare knuckles lawyer the Church would have hired thirty years ago to cover up sex abuse cases. The bishop would have been someone like Rep. Jim Jordan. Neither of these men belong anywhere near the impeachment inquiry.

This is so outrageously inappropriate for an AG to be saying. You are the head of the DOJ for all Americans not just the ones in the Federalist Society. Please start acting like it. https://t.co/OcaHZGi0ey

The Framers, Barr argues, rejected the “checks and balances” model and invested the "Executive power" in a solitary individual. "[W]hatever the Executive powers may be," Barr claims (emphasis mine), the Framers vested supervision of them "in a single person, the President." A recent administration found that theory broad enough for a president to drive a ground war in Asia through.

I won't pretend enough historical knowledge to critique Barr's claimed underpinnings for the unitary executive theory he believes is neither “new” nor a “theory.” What I will say is it speaks to the royalist strain in the American psyche that never really vanished.

Some of America's most ardent constitution-clutchers yearn for a king, or at least for a government by hereditary royalty and landed gentry. They believe the rich are their proper rulers by genetic superiority if not by divine right.

Matt Taibbi in his snappier days (after the financial collapse and in the heyday of Glenn Beck) described the impulse in regard to protecting "job creators" from accountability for their actions:

It’s a classic peasant mentality: going into fits of groveling and bowing whenever the master’s carriage rides by, then fuming against the Turks in Crimea or the Jews in the Pale or whoever after spending fifteen hard hours in the fields. You know you’re a peasant when you worship the very people who are right now, this minute, conning you and taking your shit. Whatever the master does, you’re on board. When you get frisky, he sticks a big cross in the middle of your village, and you spend the rest of your life praying to it with big googly eyes. Or he puts out newspapers full of innuendo about this or that faraway group and you immediately salute and rush off to join the hate squad. A good peasant is loyal, simpleminded, and full of misdirected anger. And that’s what we’ve got now, a lot of misdirected anger searching around for a non-target to mis-punish… can’t be mad at AIG, can’t be mad at Citi or Goldman Sachs. The real villains have to be the anti-AIG protesters! After all, those people earned those bonuses! If ever there was a textbook case of peasant thinking, it’s struggling middle-class Americans burned up in defense of taxpayer-funded bonuses to millionaires. It’s really weird stuff. And bound to get weirder, I imagine, as this crisis gets worse and more complicated.

It did get weirder.